On the way to Grand Marais

The first weekend in October we took a road trip to Grand Marais. It’s just over four hours by car, though that assumes no stops (which is never a safe assumption with me in the car). Here are some of the things we saw on the drive.

We were delayed briefly in road construction on 35 near Hinckley, so we enjoyed the colorful trees. 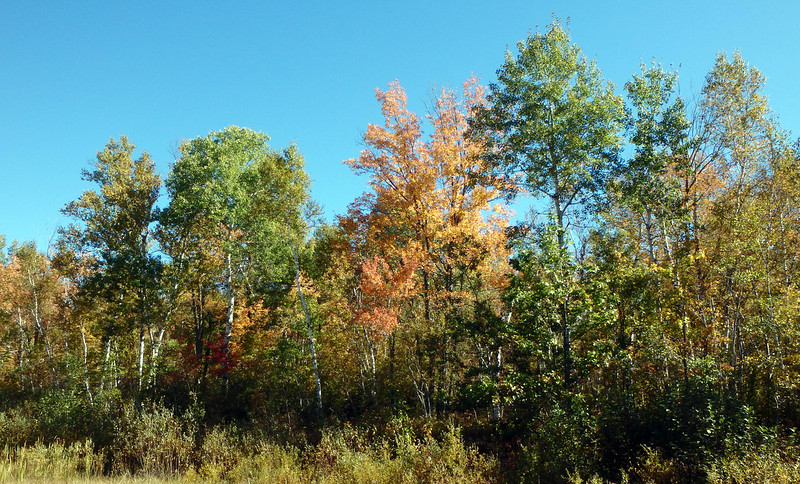 Lunch in Duluth, with a quick glimpse at the lift bridge as we sped past.

On the north end of Duluth, we got our first clear look at Lake Superior.

We took the Highway 61 expressway to Two Harbors rather than the scenic drive along the shore. Of course we had to take one brief turn off the highway to see Pierre the Voyageur. He used to be at the Voyageur Motel in Two Harbors, but now he’s a greeter just before you reach the town. He looks like he has no pants, although his new owners have said he’s wearing tights. (I didn’t get close enough to verify.) 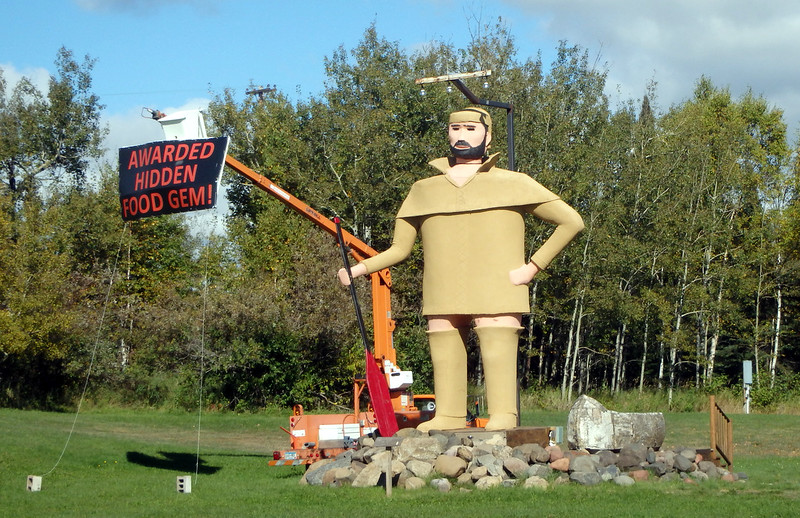 A sign of autumn: pumpkins for sale in Two Harbors. 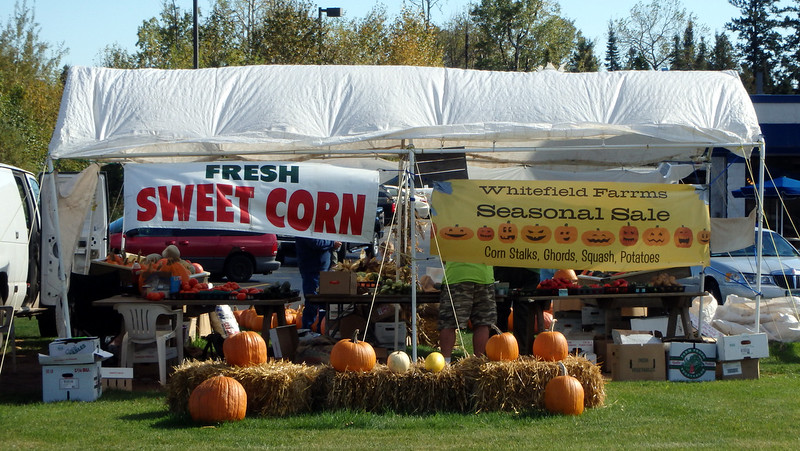 The tunnel that’s a familiar milestone to everyone heading north on Highway 61. 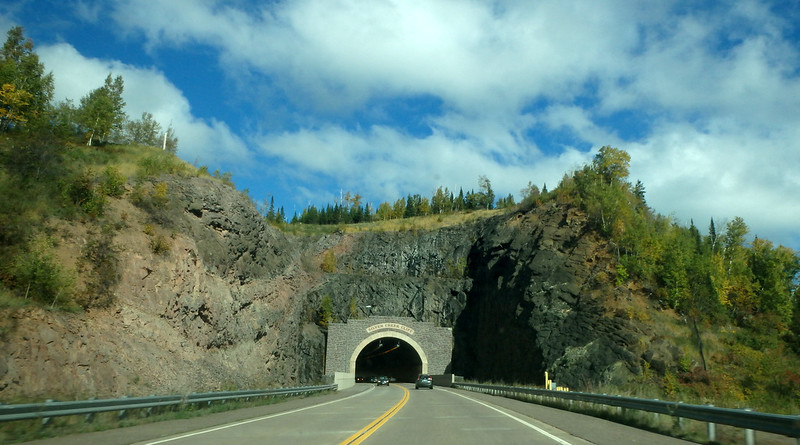 My in-motion photo of the brief glimpse of Split Rock Lighthouse from 61 was so blurry that I deleted it. We then made a spontaneous stop at Gooseberry State Park for a short hike out to the falls. The rest area at Gooseberry is one of the few locations in Minnesota state parks where a parking permit is not necessary (though we have one anyway). It was late afternoon on Friday and the parking lot was packed; cars were even circling to grab a space when others were leaving. I bet it was even busier the next day. 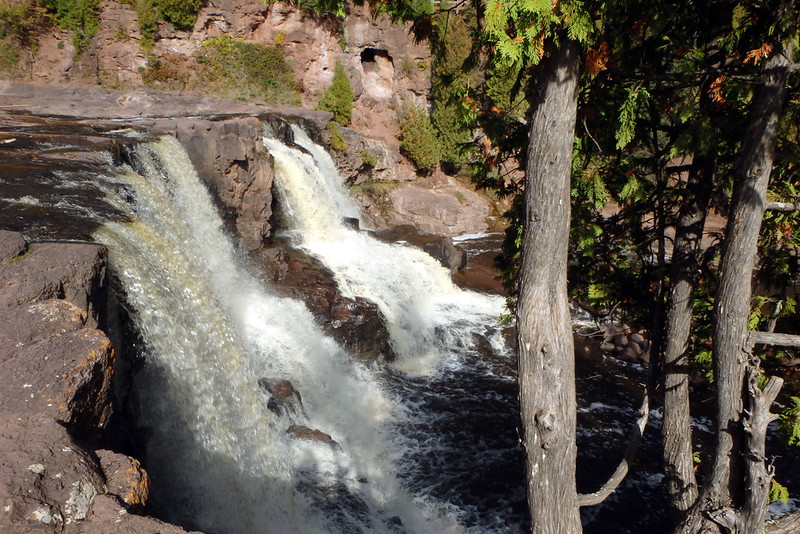 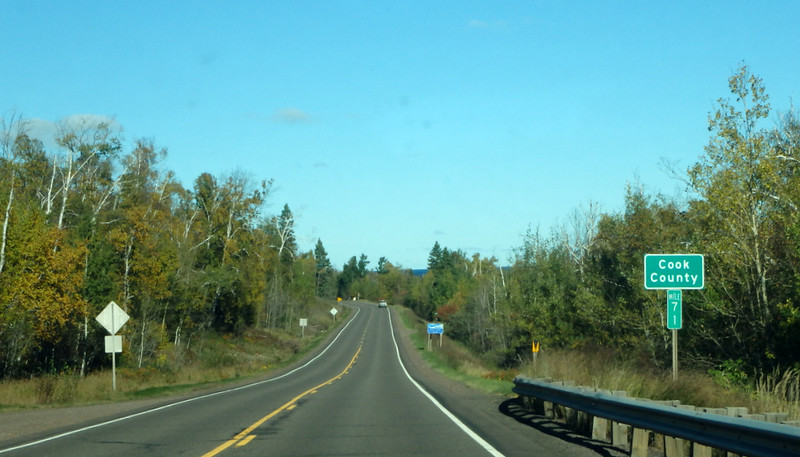 We’d been advised that a tram ride at Lutsen Mountains is always fun but essentially required in autumn – and we were lucky enough to hit a peak weekend for fall color. We were there in late afternoon with the sun just starting to set behind the mountain… 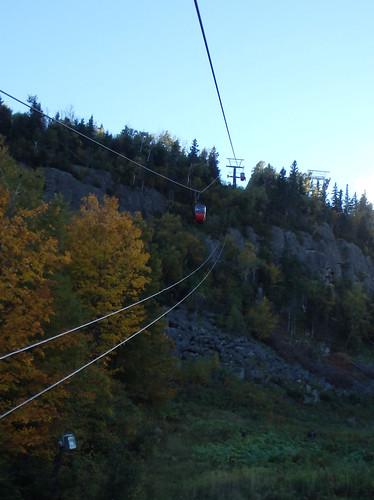 …but looking the other direction, a gorgeous autumn view! 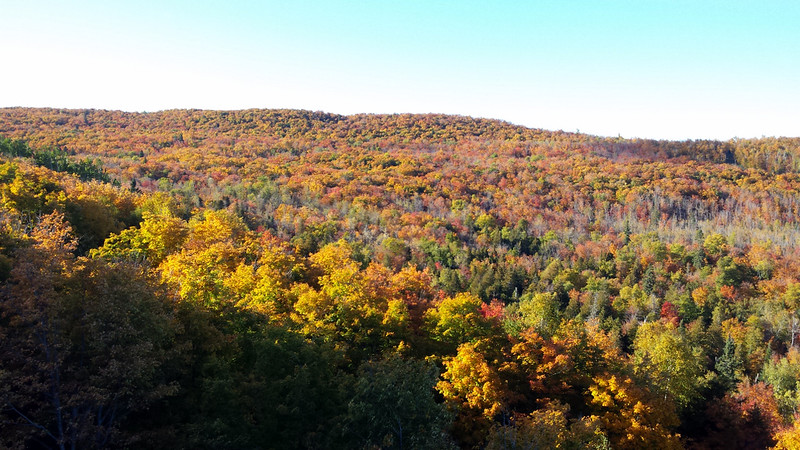 The charming trams, whose days are numbered… 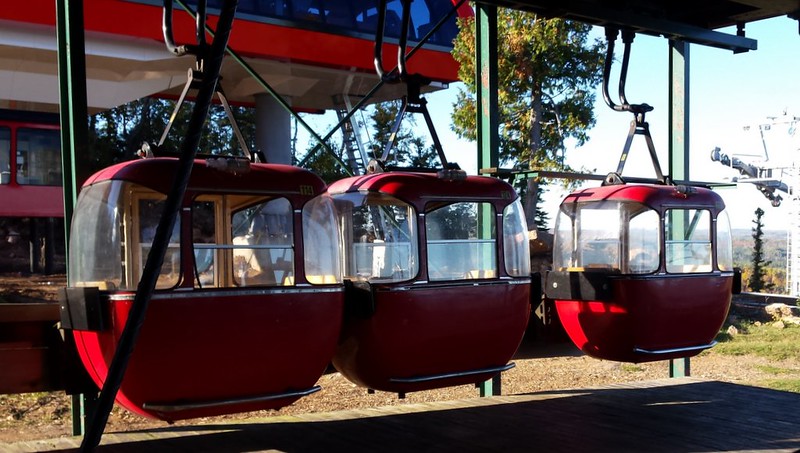 …because a new tram system is about to be launched. 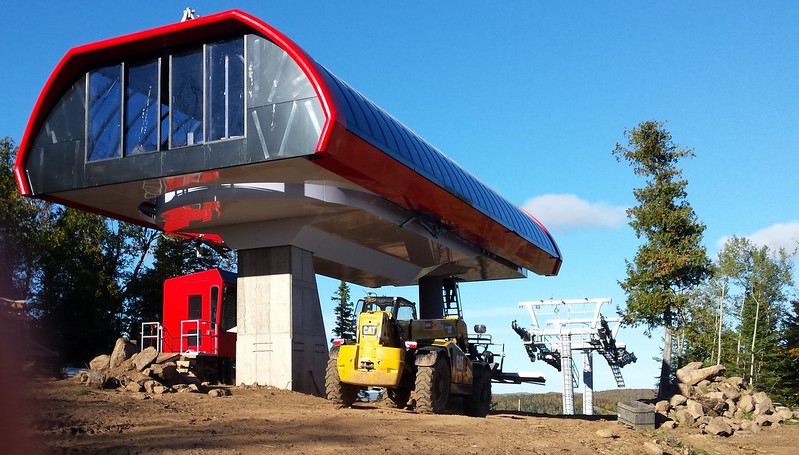 A view of Lake Superior in the distance on the way back down the mountain. 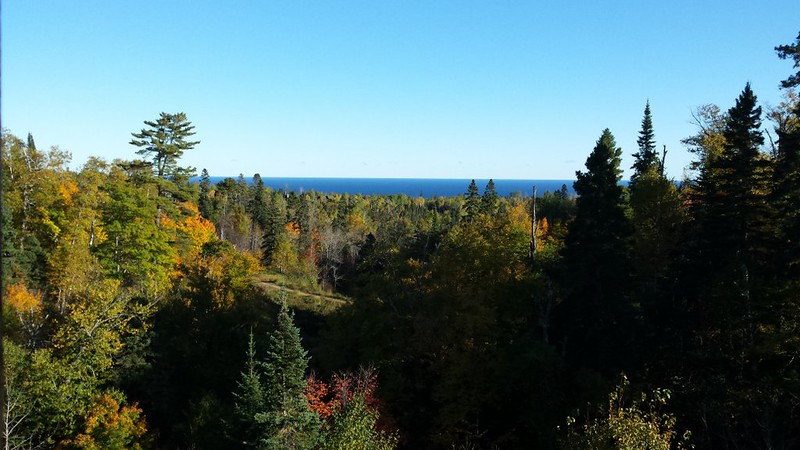 Our tram’s shadow in the orange trees. 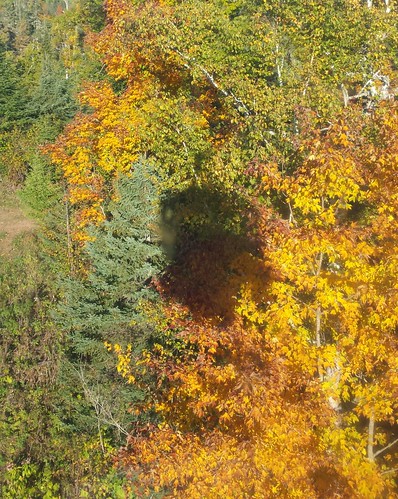 The second day we were in Grand Marais, we ventured north to Naniboujou Lodge for a late lunch. I had a ridiculously delicious turkey club sandwich with cranberry and mustard, which seems like a strange combination but worked. I also had their famous french onion soup and burned my mouth because I couldn’t wait until it cooled. 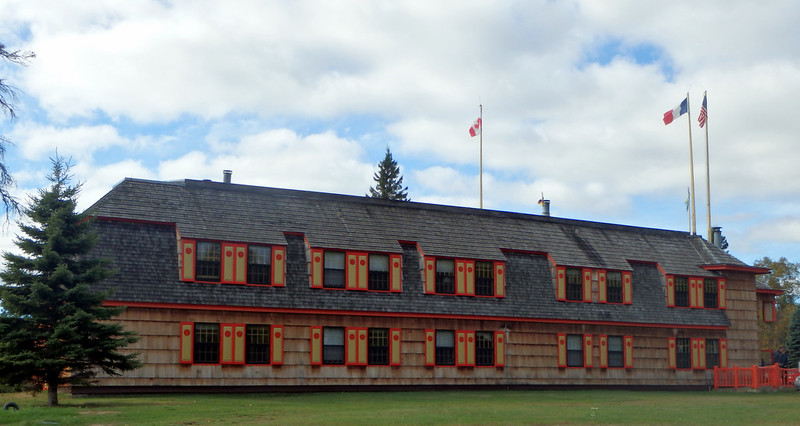 Everyone takes pictures of the ceiling inside the lodge’s restaurant, and it’s easy to see why. 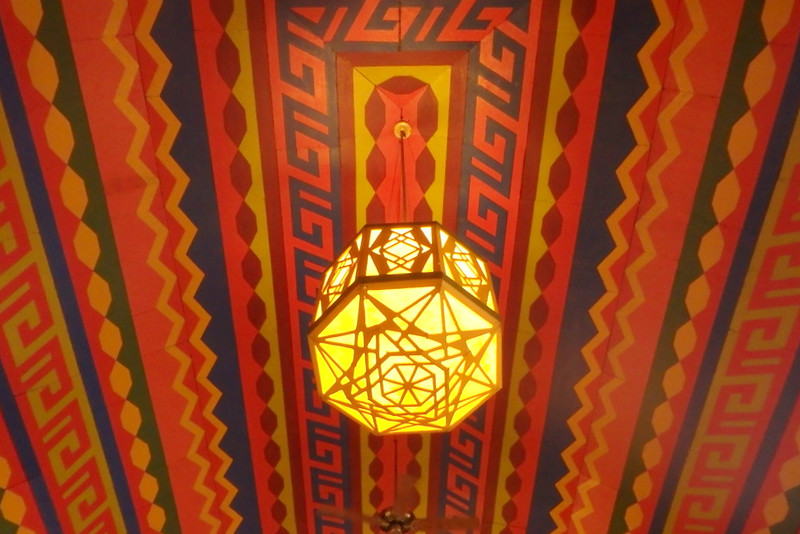 Of course we also visited the state park (Magney) that’s across the street from the lodge. More about that will be in a future post. (So will Grand Marais itself.)

We stopped at a public beach in Colvill on the way back to Grand Marais. I was mesmerized by the Lake Superior’s giant waves all weekend.

On the way back to the Cities on Sunday afternoon, we made a quick detour in Silver Bay to see Rocky Taconite. 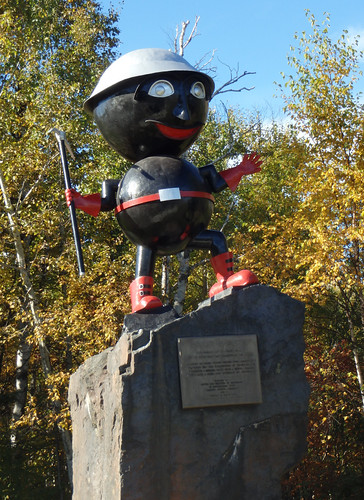 A short stop in Two Harbors to see the grand Lake County courthouse. We had stumbled across it on a cloudy day in August and wanted to see it again on a nicer day. 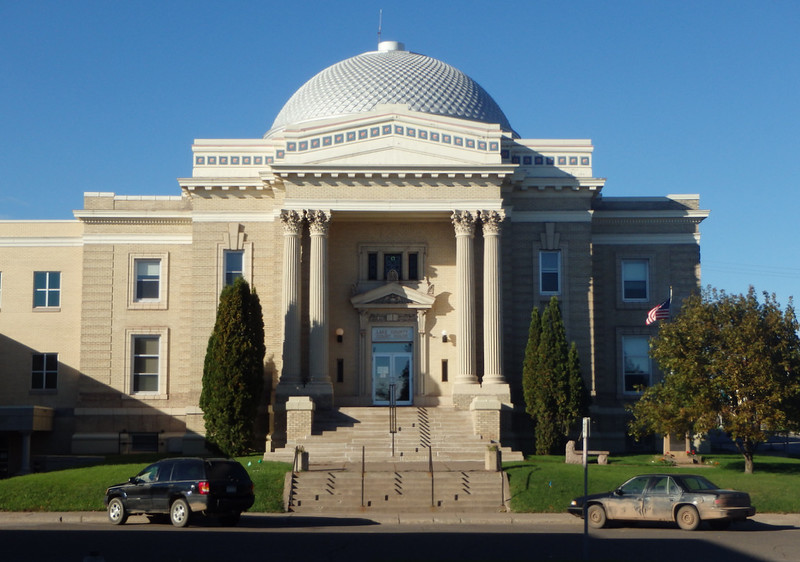 Even a rest stop is beautiful in autumn. We pulled over at this one just outside Knife River because a sign advertised a historical marker, which noted that the four-lane divided part of Highway 61 is called the Arthur V. Rohweder Memorial Highway. 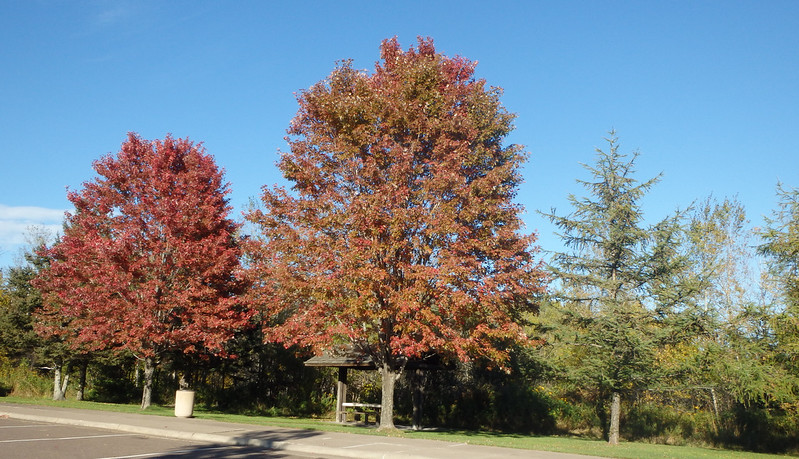 It was at this point that Bill decided to take over the driving responsibility. I think he had had enough “detours” – though we had already planned to stop in Knife River anyway for the Great Lakes Candy Company. We picked up caramels, chocolate-covered toffee, and sponge candy. 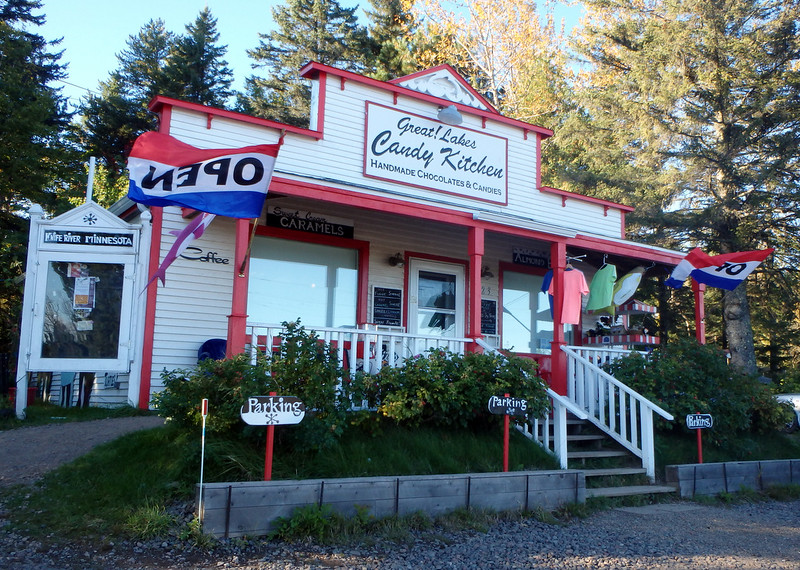 Only in Minnesota: a sign advertising a fishcake supper. 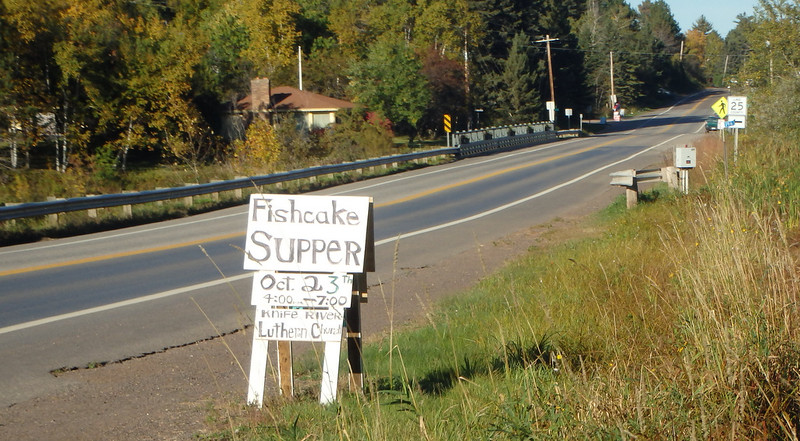 We took the scenic half of highway 61 after Knife River. There are many pulloff areas for viewing Lake Superior. Just north of Duluth, we saw a barge.

Our last stop of the trip was at the Thomson Hill Information Center, a rest stop on the south end of Duluth, where we saw the barge heading toward the lift bridge.

More from the North Shore