A weekend in Grand Marais

Grand Marais has been high on my list of Minnesota places to visit for years, and with a birthday to celebrate, we headed there the first weekend of October. Even before we went, I was sure we’d need to plan a weeklong vacation for next summer because there were more restaurants than there were meal opportunities!

Since we took a long time driving to “America’s coolest small town,” the sun was already starting to set when we reached Grand Marais. Immediately went to the public access park to get our first up-close look at Lake Superior: 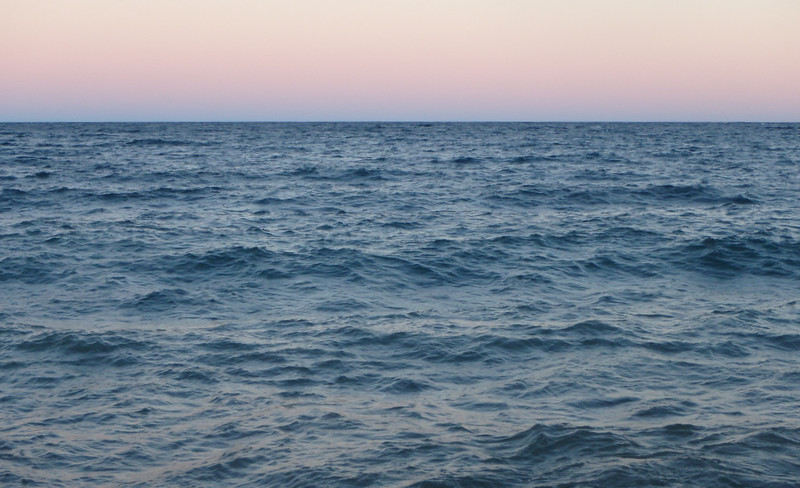 Then we turned around and took a short walk down “Main Street” – actually, Wisconsin Street – for dinner at Sven & Ole’s. Their menu isn’t posted on their website, and though you order at a counter, there isn’t a menu board on the wall, so we didn’t know the options. I was nervous that we’d be on the spot with a long line behind us, but both the man taking the order and the people who were waiting were very patient. We settled on the “shicken and vild rice” pizza, which was good – though I didn’t really notice the wild rice. It wasn’t very crowded for a Friday night, though the counter was always busy, often with people who were taking their pizzas to go. 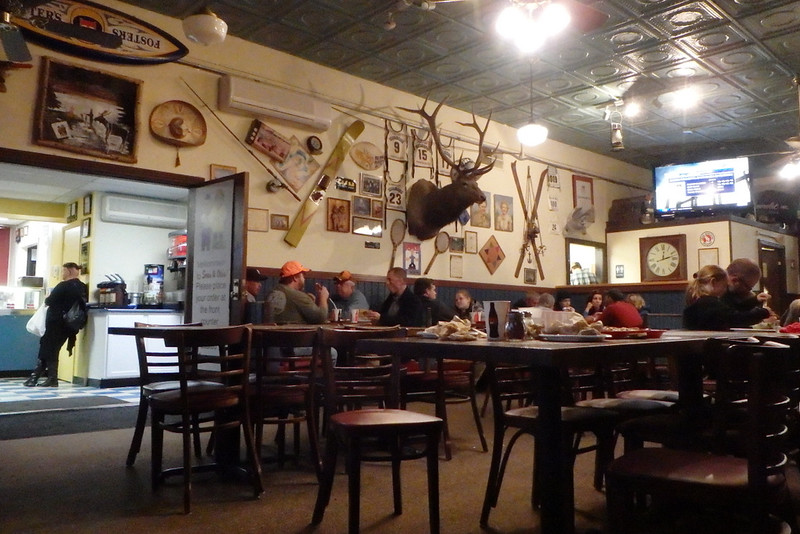 We then explored the area in the dark, planning what to visit the next day, and reached Pie Place as they were closing; we were able to buy two slices to go. The pie was good and it wasn’t cheap.

We stayed at one of the cabins that are part of the MacArthur House B&B – two bedrooms, living room, and furnished kitchen, a great setup for a long stay (though this time we only stayed two nights). 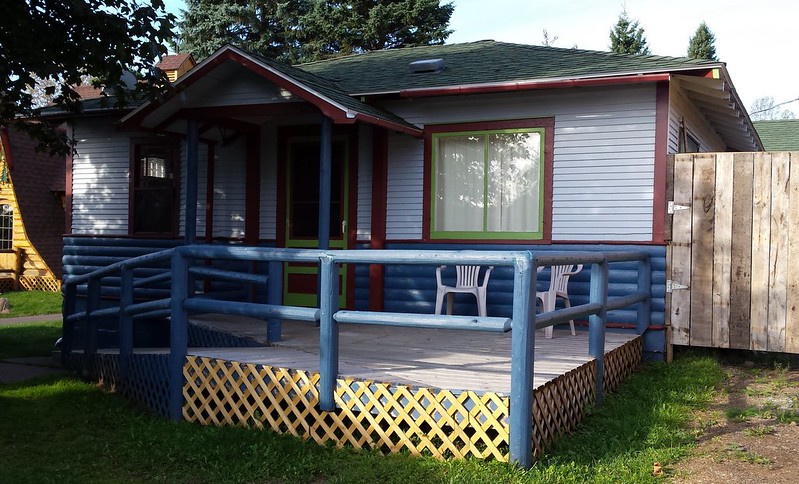 Saturday morning we noticed the county courthouse, nestled in the neighborhood kitty-corner from the cabins. 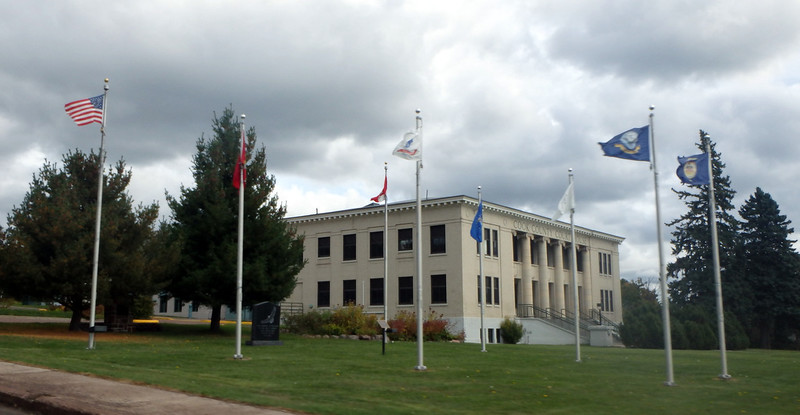 Our first breakfast of the weekend was at Blue Water Cafe. It was busy but organized: just when one table would empty, a new group would arrive to take their place, though I never saw anyone waiting. Bill had the fishcake special, which turned out to be a fish-infused pancake, complete with tartar sauce on the side. I enjoyed the “Welcome (Canadian) Neighbours” signs in this restaurant and lots of other places in town, and I really liked the Lake Superior mural on the mall. 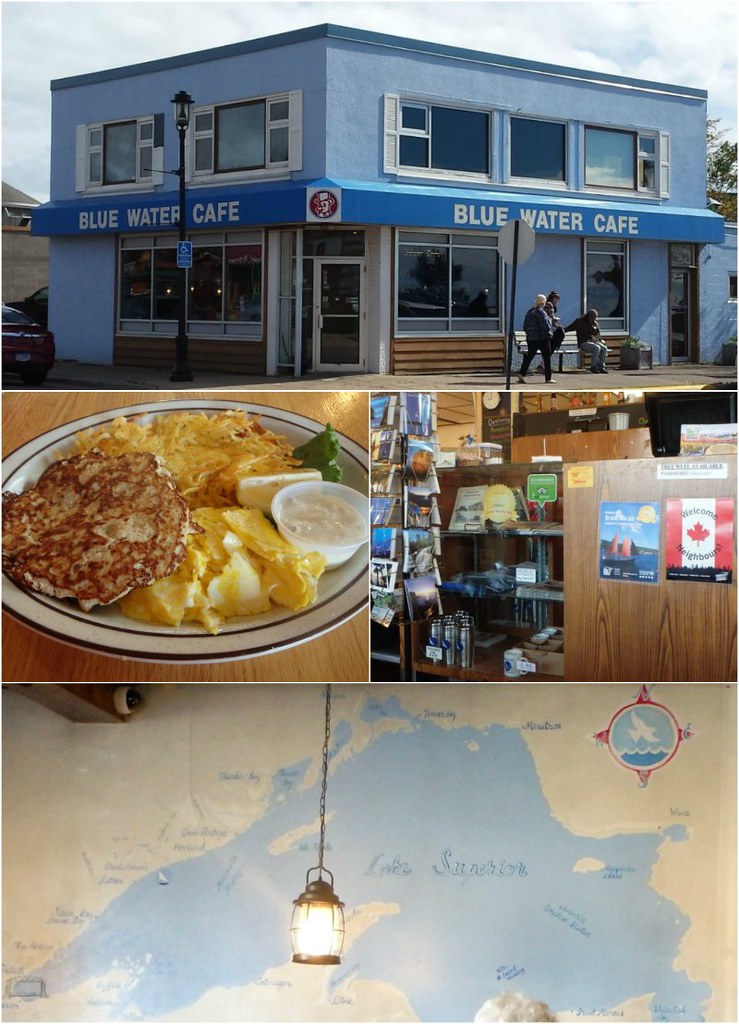 Since we were just blocks from the lake, we walked out again to take a look at the big waves. Friday and Saturday were very windy. 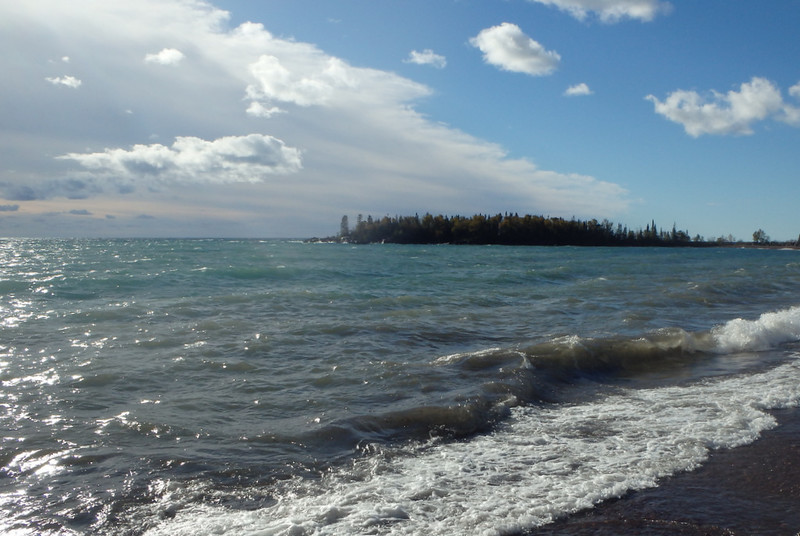 And later we enjoyed a mid-morning snack at World’s Best Donuts – a chocolate glazed donut, a cinnamon sugar donut (I photographed it with the lake in the background, which is apparently the thing to do these days), and a “skizzle” (basically an elephant ear) to save for the next day. They really might be the world’s best. 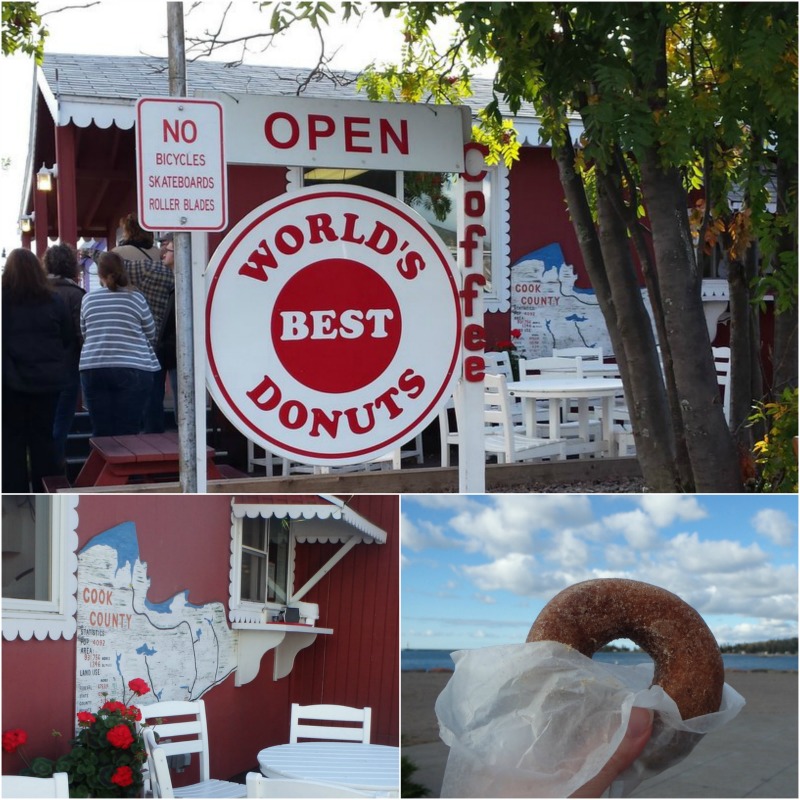 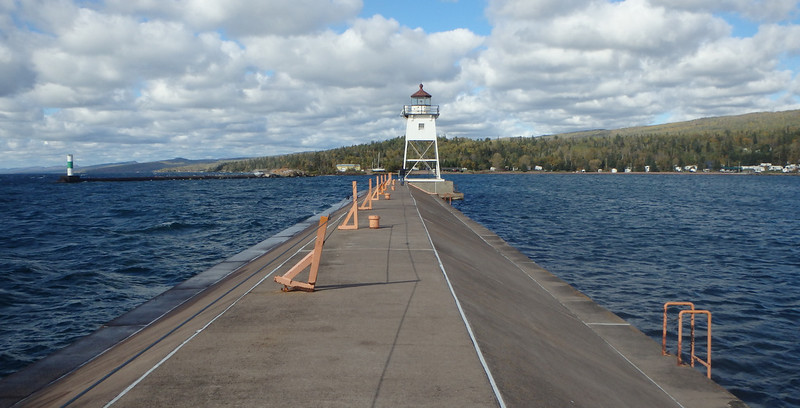 …and back to Artists’ Point, made of basalt from ancient lava flows. 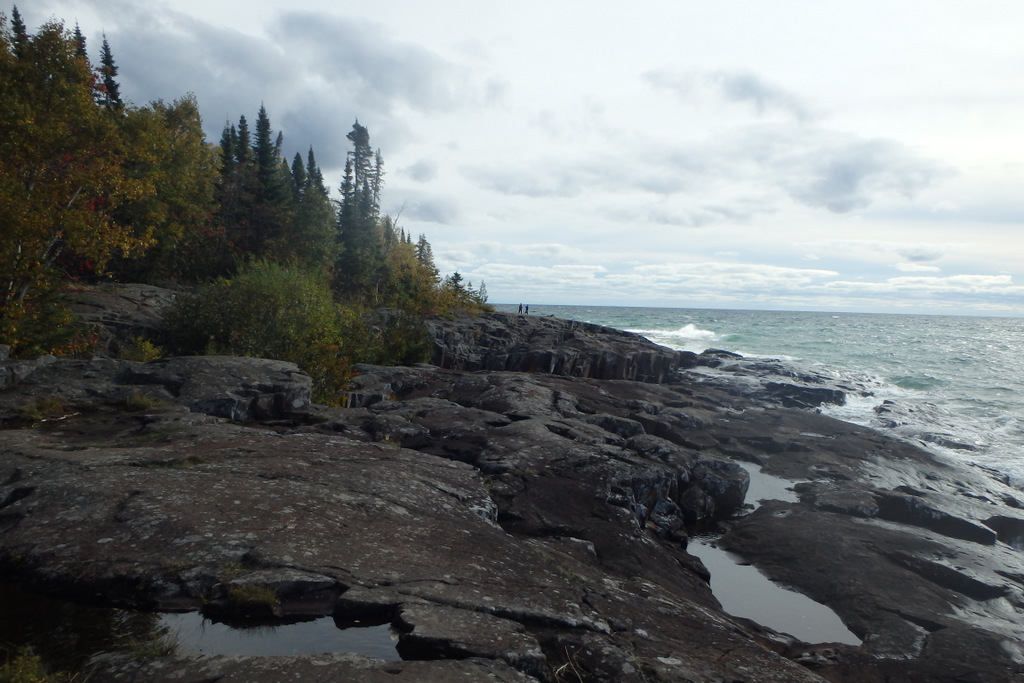 I was enjoying watching and filming the big waves at Artists’ Point when one surprised me:

With all the wind, it didn’t take long to dry off as we walked back to go through the shops downtown… 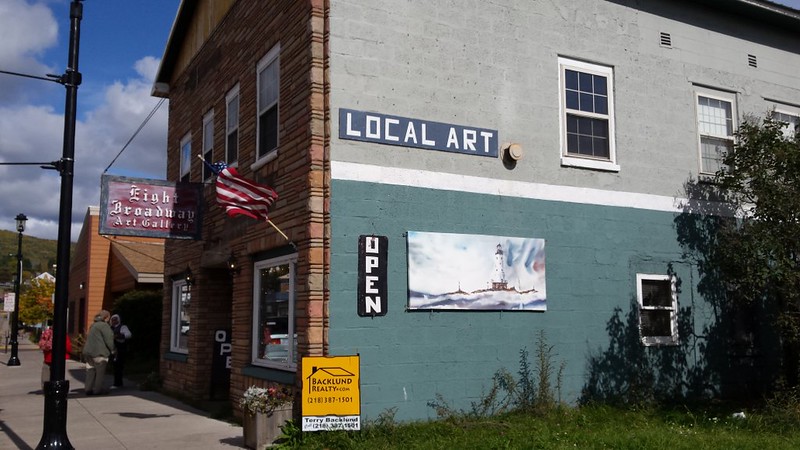 …including a stop at the famous Joynes Ben Franklin: cribbage boards and other knick-knacks, Gunflint Trail scrapbooking supplies, a wire bookshelf with local and Minnesota books. Good thing we went on Saturday, because we found out the next day that they’re closed Sundays. 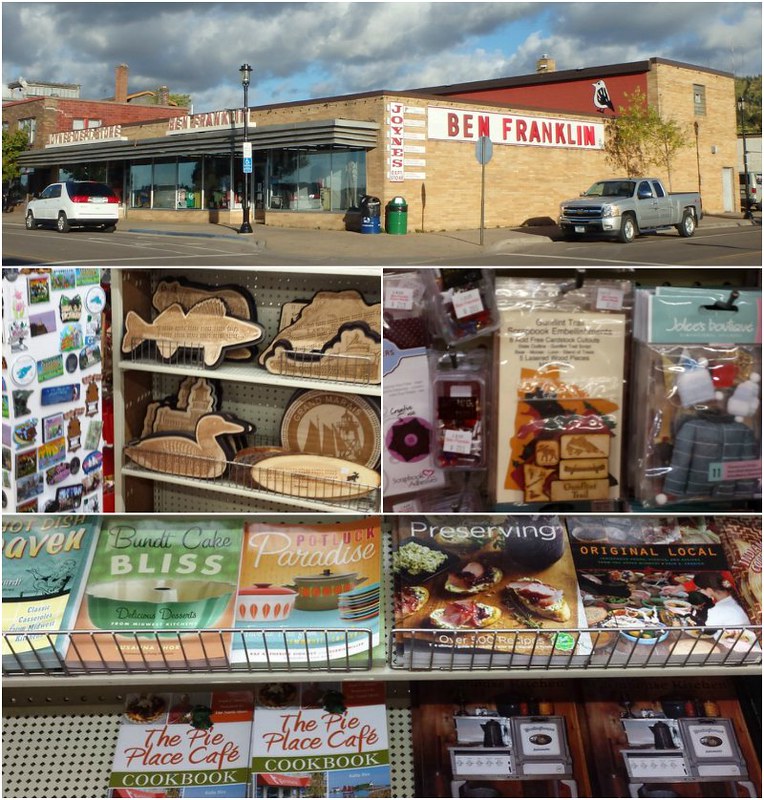 There were many outdoor paintings around town, like this one of the America, which sank in Lake Superior in 1928, by Lyle Sathre: 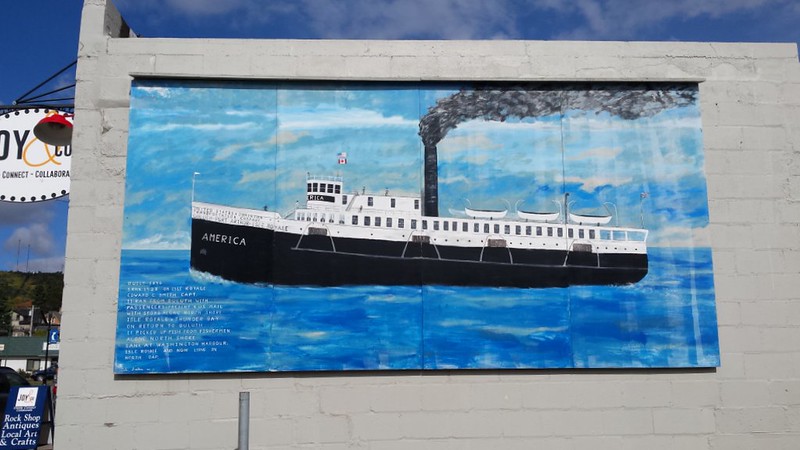 I was intrigued by this blacksmith shop, which we later learned opened in 1911, was owned by three generations of Ballys, and is on the National Register of Historic Places. It’s now owned by the Cook County Historical Society, which is in the process of preserving and redeveloping the building and grounds with help of a fundraising campaign and a legacy grant from the Minnesota Historical Society. 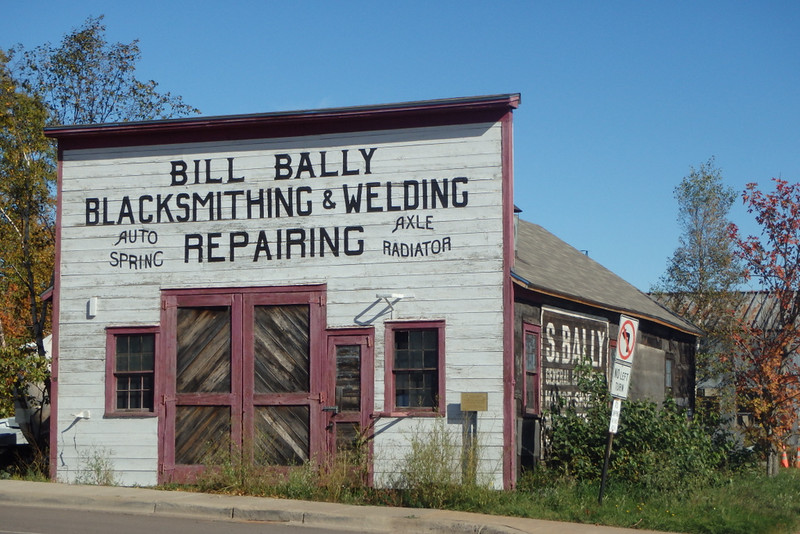 In the afternoon we headed north on 61 to Naniboujou Lodge for a late lunch, then a hike to the Devil’s Kettle waterfall at Judge Magney State Park (more about the park in a future post).

After a short rest back at the cabin, we decided to walk down the few blocks to the Angry Trout for dinner. I thought that even though it was a Saturday, it probably wouldn’t be too busy because it was so late in the year – but I was wrong. Harbor Grill across the street had a long line, too, so we headed back to grab the car and venture out, and we ended up at My Sister’s Place on the north end of town. There was a line there, too, but we waited for only about 15 minutes. 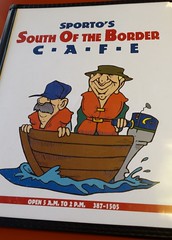 We were tired after our long Saturday adventure, so we slept in the next morning and had a late breakfast at South of the Border Cafe, with its charming menus. (Apparently some online reviewers are confused about which border they’re referring to. Grand Marais is only about 50 miles from the Canadian border – so it’s not Mexican food but diner food, cheap.)

The wind was much calmer on Sunday. We took one more trip to the lake, where I collected a few rocks and watched (and listened to) the waves pulling rocks back into the water:

One more walk through town, and we stumbled across an art exhibit showcasing works from the plein air festival at the Johnson Heritage Post art gallery. 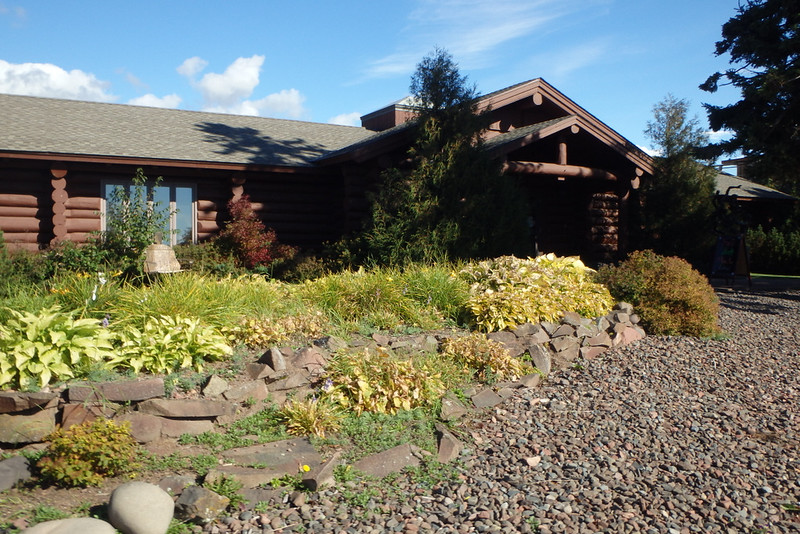 Early afternoon on Sunday was a much easier time to get into Angry Trout Cafe – no waiting. 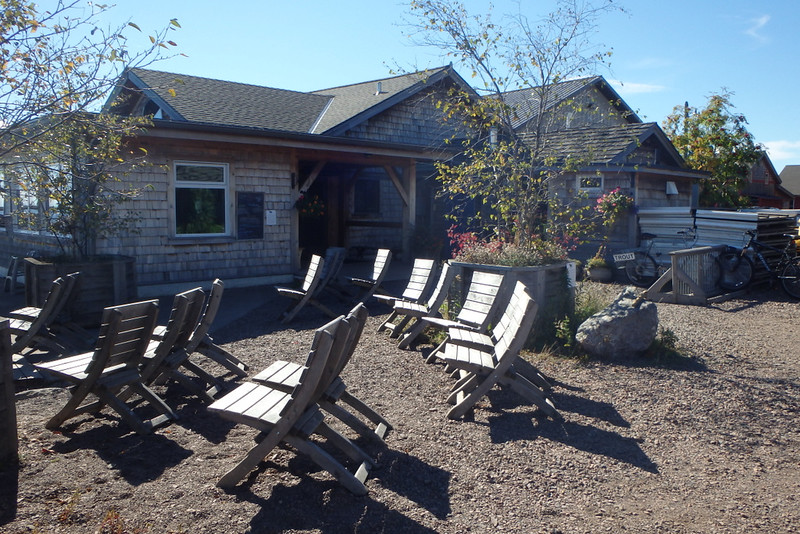 As we were leaving, we picked up smoked trout to go at Dockside Fish Market next door. 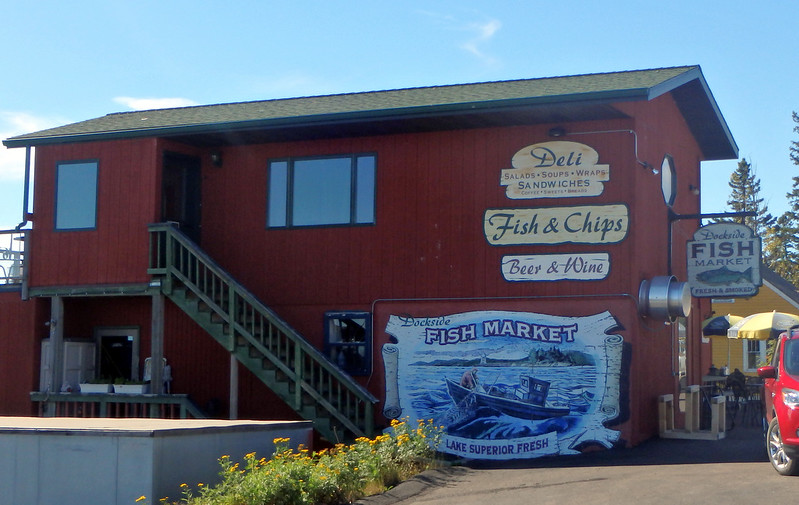 Though our vacation was coming to an end, we weren’t quite ready to leave yet, so we spontaneously started driving the Gunflint Trail… 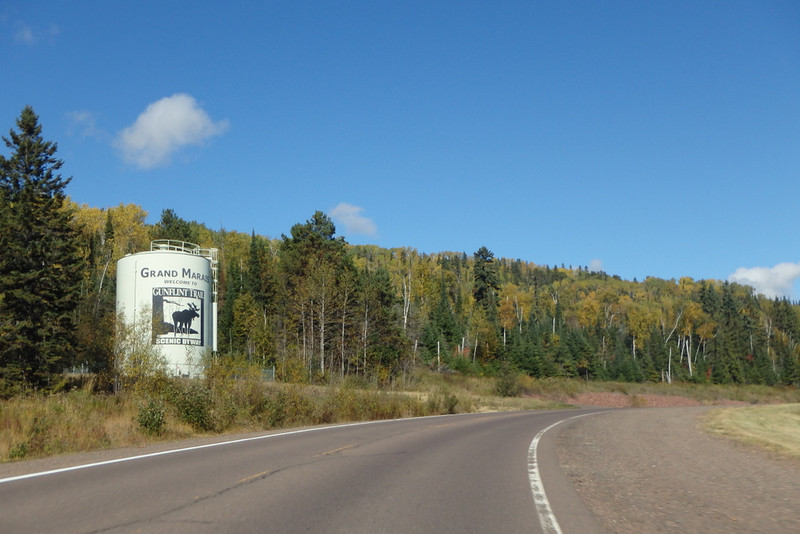 …and stopped at the scenic overlook. 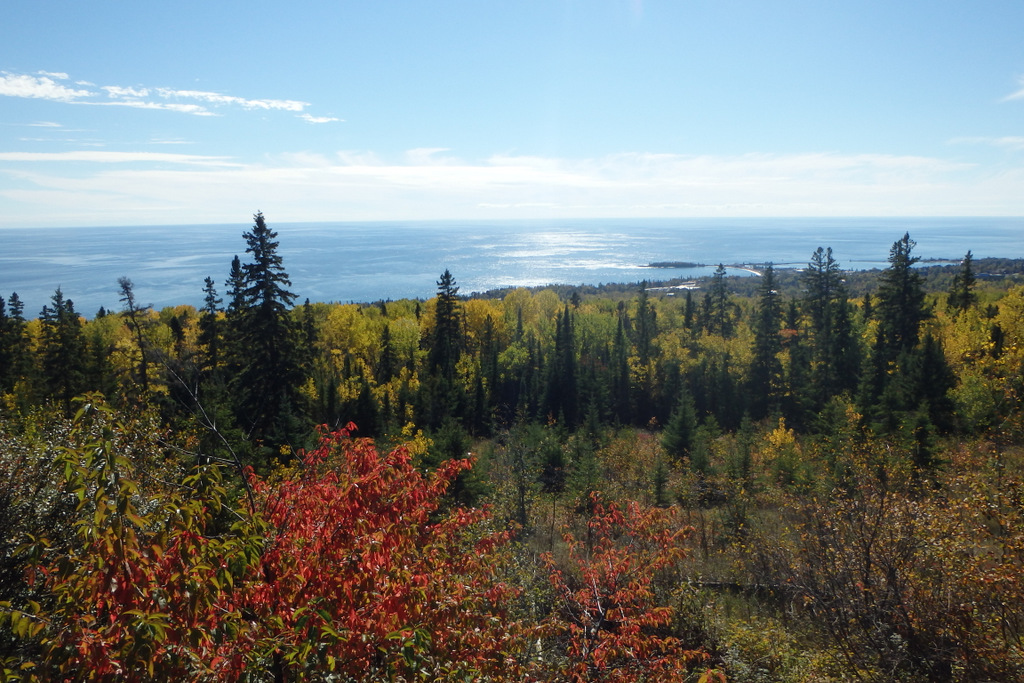 And then it was time to head back to the Cities. Here’s my favorite picture of the weekend, showing the lake and the town and the hill. 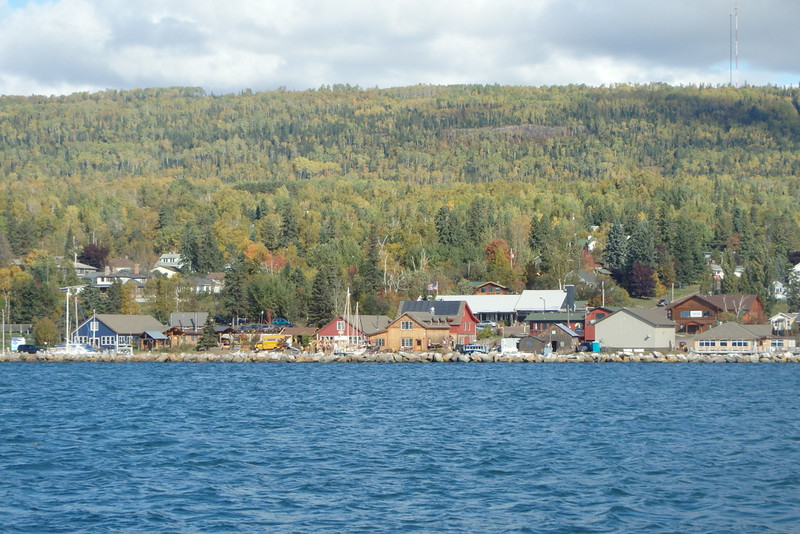