The last five years for the Minnesota Lynx: four WNBA Finals appearances, three trophies. A week ago, the Lynx won the title at home for the first time. 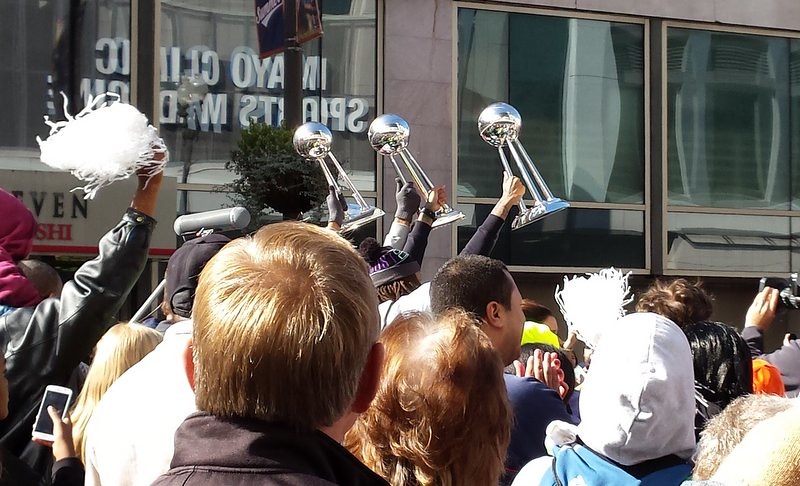 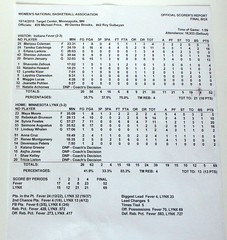 Boxscore from Game 5 of the 2015 WNBA Finals at Target Center.

Since the first Lynx game on June 12, 1999, I have seen most of the team’s home games. I was in the right place at the right time when the team joined the WNBA in 1999 and they needed workers for their gameday stats crew. My three-person team records all of the shots, rebounds, assists, steals, fouls, and so on to create the official boxscore. My younger sister, Ellen, joined our crew in 2008. While I’ve cut back to working only half of the games for the last two seasons, I’ve enjoyed working with the team from a courtside seat for 17 seasons – but of course, winning is much more fun than losing.

Before 2011, the Lynx had varying degrees of success: they finished just under .500 their first two seasons, then much worse the next two years; they reached the playoffs in 2003 and 2004, with a come-from-behind win in their first playoff game, but still exited in the first round both seasons and then missed the playoffs the next six years. It took awhile, but the team’s luck started to change.

The Lynx won the draft lottery in 2006 and picked Seimone Augustus, the college player of the year. Then in 2010 came a new coach, a trade for hometown favorite Lindsay Whalen, and the addition of veteran Rebekkah Brunson, who had already won one WNBA title. The following year the Lynx added Maya Moore, who had won two championships in college and eventually earned WNBA Rookie of the Year honors, and center Taj McWilliams-Franklin, a six-time WNBA all-star who had also already won a championship.

2011: The Lynx set a franchise record with 27 regular-season wins and recorded their first playoff series win, then their second. Then their third. The deciding game of the Finals was in Atlanta, so we watched it in my sister’s apartment. A few days later, the team held a parade in Minneapolis, with fans lining the streets several rows deep (enough that I could barely see the players) and filling up the skyways. 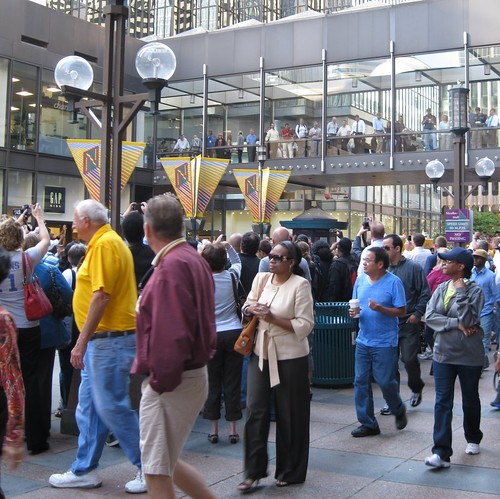 The fans then filed into Target Center for a championship rally: 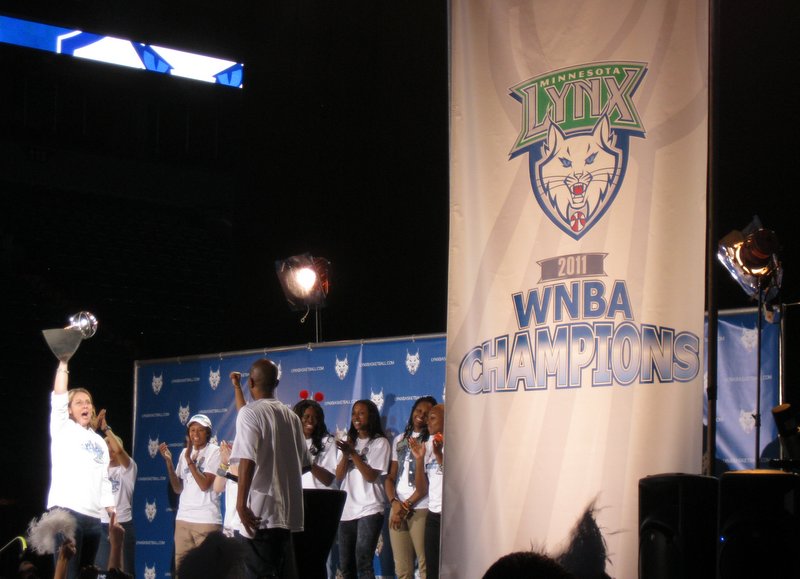 2012: The Lynx won their first 10 games and finished with 27 wins again. They earned a return trip to the Finals, falling to Indiana in four games despite having homecourt advantage.

2013: Minnesota added a new center, another hometown favorite, Janel McCarville. Forward Devereaux Peters had joined the year before. The Lynx swept all three rounds of the playoffs. In the Finals: same opponent as in 2011, same three-game sweep. 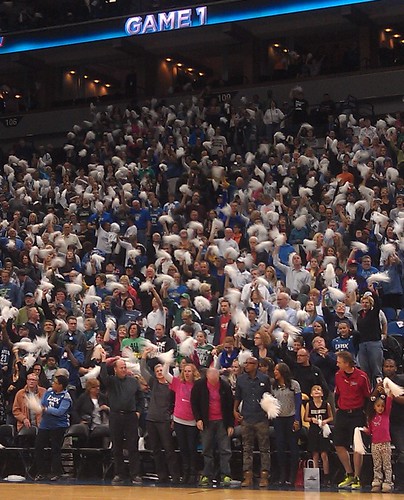 The Riverview Theater in Minneapolis showed Game 3, and my sister and I attended with hundreds of excited fans: 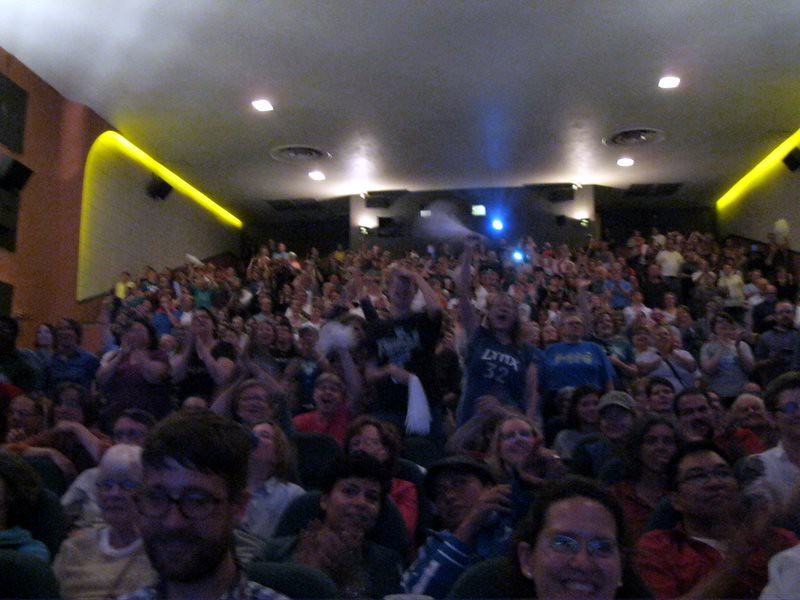 We hung out with Mary Tyler Moore (the statue) at the parade. That was the year Katy Perry’s “Roar” was so popular, and it became the team’s anthem. (I wished they would have changed the lyrics to “I’ve got the eye of the LYNX … and I am a champion” – but I suppose there were legal reasons why they didn’t.) 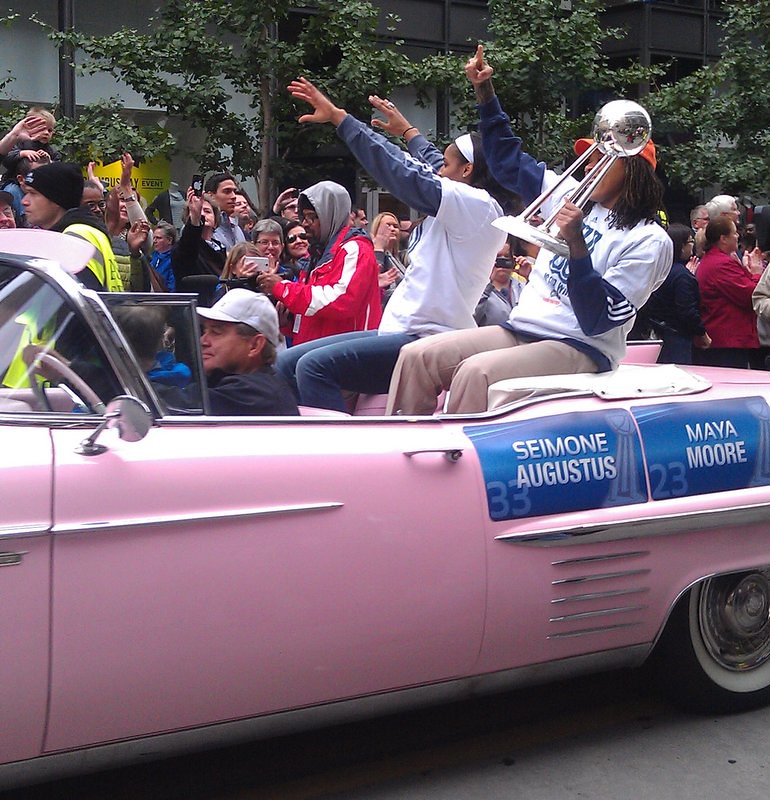 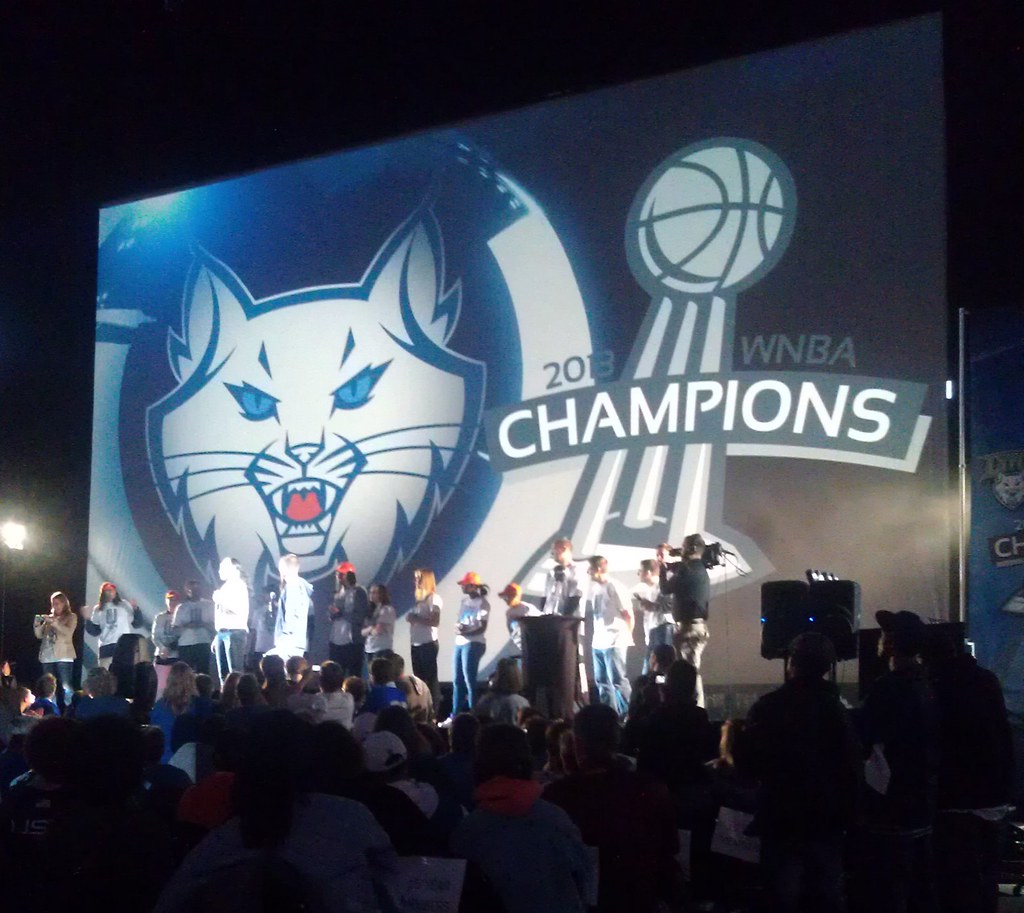 2014: The Lynx finished the regular season second in the Western Conference and lost in the conference finals to the eventual champions. Moore was named the league MVP.

2015: The addition of guards Anna Cruz and former Lynx Renee Montgomery helped when Augustus and Whalen were injured. A midseason trade brought center Sylvia Fowles. The team struggled in the second half of the regular season but gained momentum heading into the playoffs, setting up a Finals rematch against the Fever, the only team to beat the Lynx in the championship. I missed game 1 due to a poorly timed (by myself) weekend vacation, and Indiana stole home court with a win. I was back for Game 2, which the Lynx won.

With that buzzer-beater, the Lynx regained homecourt advantage. They could win the series in Indiana in Game 4, or return to Minnesota if they lost. Ellen and I drove to Indianapolis to watch Game 4 as fans. Their arena has a scoreboard that seemed to be as big as the court, as well as a banner celebrating their 2012 championship (when they beat the Lynx). 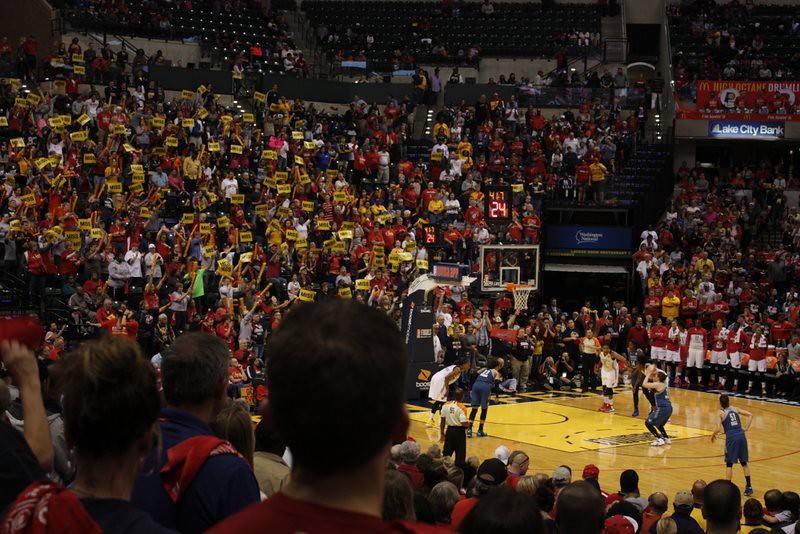 The highlight of that game for me was the return of Red Panda, the halftime entertainer. She’s an acrobat who balances bowls on her foot, then flips them into a stack on her head – while wearing heels and riding a unicycle. And whenever she successfully flips the bowls – which is every time – she seems surprised that it worked. She is the unanimous favorite halftime act of my group of friends, but we were all sad when she had to retire about a year ago due to injuries. The Fever apparently convinced her to return.

It would have been fun to see the Lynx win there – but when they didn’t win, it set up a deciding Game 5 at Target Center in Minneapolis. 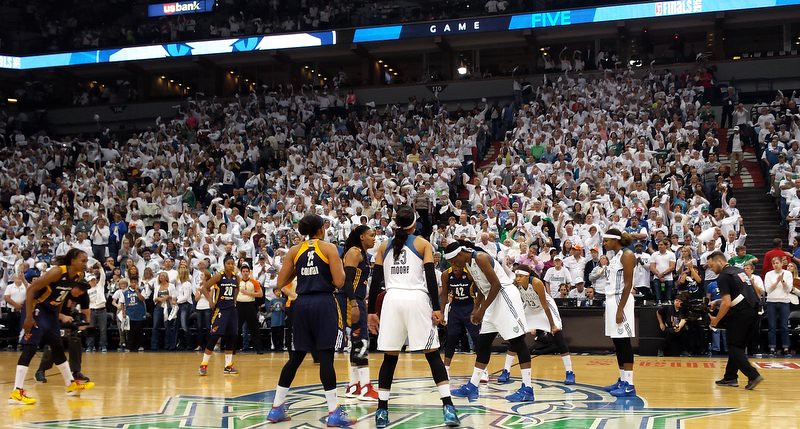 It was a slow first half for both teams. In the third quarter the Lynx broke away. Indiana made a run in the fourth quarter, but the Lynx lead was too big. 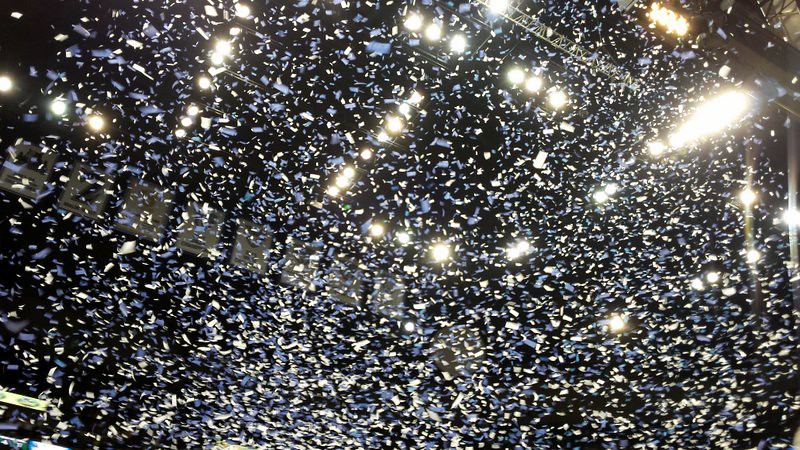 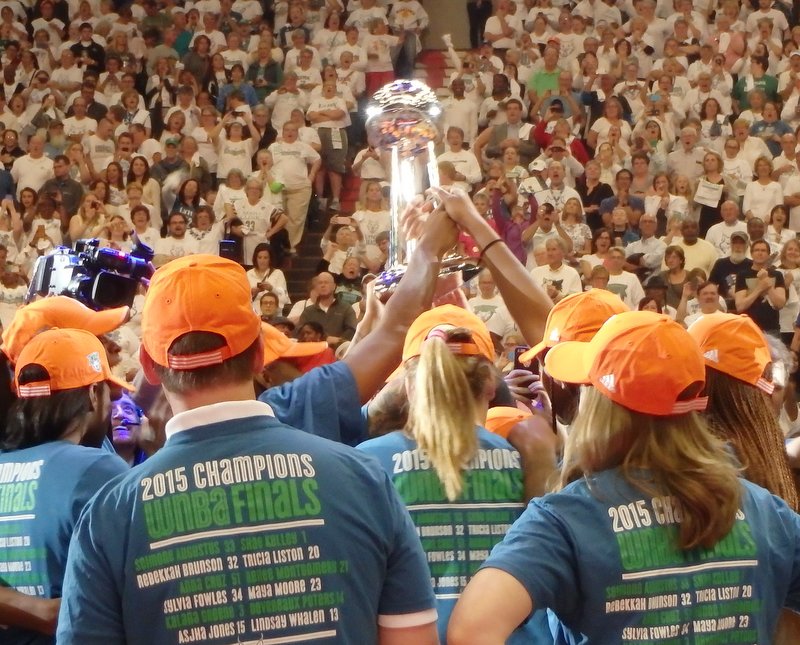 The 2015 parade was on a Friday morning. Luckily, my sister and I already had the day off. Too bad it couldn’t have been held on a Saturday so more fans could attend. 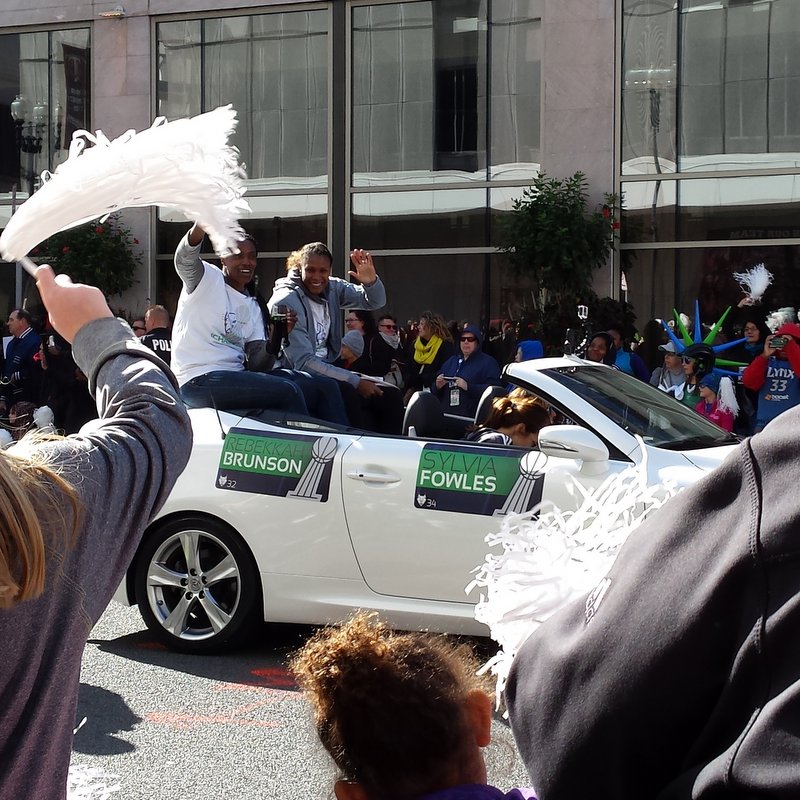 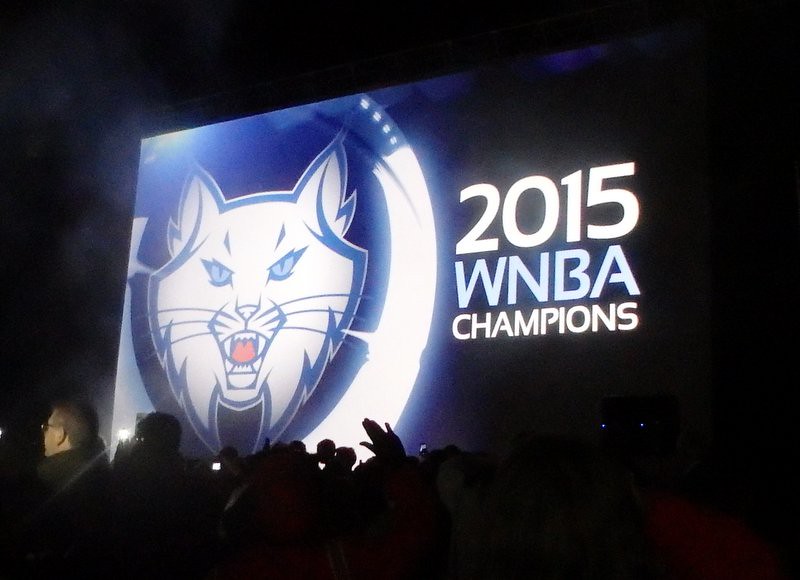 The Lynx have many All-Stars, many Olympians, many people who are able to score. They’ve won championships with three different centers – and three different Finals MVPs: Augustus in 2011, Moore in 2013, and Fowles in 2015. The Lynx are approachable and likeable, even dancing with fans after home wins.

My favorite of my photos from this year is of the team receiving the trophy. I once read advice to stand behind people who are posing for a photo because “that’s where the love is.” The teamwork shows in this picture. 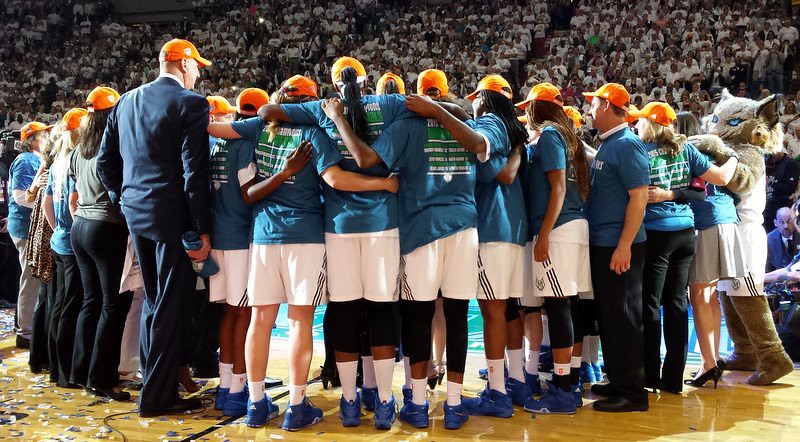 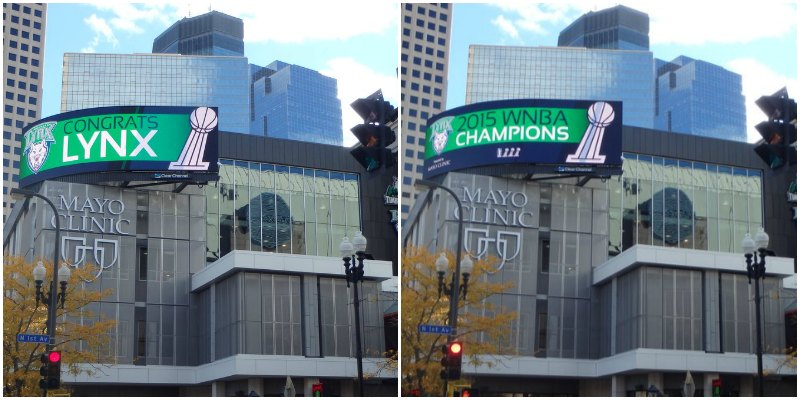 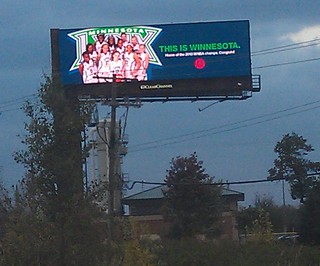