We wanted to spend our anniversary at a state park, and what better place to visit in early spring than Nerstrand Big Woods, the exclusive home of the endangered dwarf trout lily? Faribault is close by, so we decided to make it an overnight trip and visit the park in the morning. I was surprised at how quickly we arrived: it’s just 35 minutes south of Lakeville. Far enough to be out of the Twin Cities, yet still reachable when beginning the journey after the workday.

Downtown Faribault: Paradise Center for the Arts and original storefronts with elaborate architecture.

After picking up some dahlia bulbs and plant markers at Farmer Seed & Nursery (the building with the giant Northern Grown Faribo Seeds sign painted on the side), we checked into our bed-and-breakfast, the Historic Hutchinson House. We stayed in Johnson’s Pride, which is just underneath the building’s iconic turret, so the room had a sitting area in an angled alcove.

The Queen Anne Victorian home, built in 1892, was converted to a bed-and-breakfast in 1987.

In the morning, we enjoyed breakfast at the kitchen table rather than the bigger dining room table, since it was a spring weekday so there was only one other room booked. Host Tami showed us around and told many stories about the house, which is on the National Register of Historic Places.

So many beautiful details inside and outside.

And she told us we couldn’t leave without stopping at Faribault Woolen Mills. 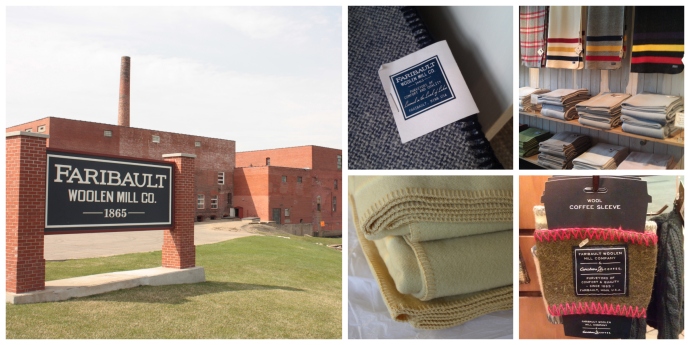 The mill is located next to the Cannon River. Images at top right show what’s available in the store. Bottom right row shows the yellow blanket we bought, plus something we found just last week for a gift when traveling out-of-state: blanket remnants turned into coffee sleeves, a joint effort by two Minnesota companies, Faribault Woolen Mill and Caribou Coffee.

We spent quite a bit of time in the store and carefully considered practically every item before choosing a beautiful yellow blanket, which is handy now that we are in a Minnesota winter. I’m charmed by the company’s tagline, “Loomed in the Land of Lakes.”

We would have liked to spend more time exploring the city, including touring the mill and visiting the cheese cave and the historic downtown, but all too soon, it was time to leave.

At least two things have changed since our visit in May:

One thought on “Overnight in Faribault”